Sick Building Syndrome has been reported with increasing frequency during recent years. Buildings that have sustained water damage harbor various molds, some of which may be toxic. Students and staff at Central Middle School in Murfreesboro, Tennessee, reported symptoms similar to those associated with Sick Building Syndrome. Upon investigation, investigators noted that a black fungal growth occurred throughout the building on wet cellulose ceiling tiles. Fungal growth of this type is consistent with the genus Stachybotrys. Stachybotrys spores contain macrocyclic trichothecenes, which may cause harm when inhaled or ingested. Bulk sampling of the black mold was initiated, and the samples were cultured in a moist chamber. Testing of the samples confirmed the presence of Stachybotrys spp., a finding that implies that air sampling procedures should ensue. Professional remediation of this potentially hazardous fungal contaminant is therefore recommended. 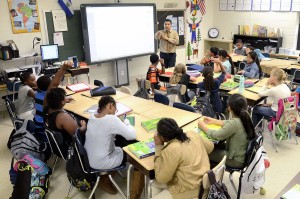 Microbial indoor air quality and respiratory symptoms of children were studied in 24 schools with visible moisture and mold problems, and in eight non-damaged schools. School buildings of concrete/brick and wooden construction were included. The indoor environment investigations included technical building inspections for visible moisture signs and microbial sampling using six-stage impactor for viable airborne microbes. Children’s health information was collected by questionnaires. The effect of moisture damage on concentrations of fungi was clearly seen in buildings of concrete/brick construction, but not in wooden school buildings. Occurrence of Cladosporium, Aspergillus versicolor, Stachybotrys, and actinobacteria showed some indicator value for moisture damage. Presence of moisture damage in school buildings was a significant risk factor for respiratory symptoms in schoolchildren. Association between moisture damage and respiratory symptoms of children was significant for buildings of concrete/brick construction but not for wooden school buildings. The highest symptom prevalence was found during spring seasons, after a long exposure period in damaged schools. The results emphasize the importance of the building frame as a determinant of exposure and symptoms.

Find the latest OSHA resources related to COVID-19. In this unprecedented we're all here and together for you. Please check some of the information to help you and your families stay safe.